This post is tangentially related to the Modal Arpeggio posts that I put online so I’ve adapted the title (just like I’m going to be adapting the arpeggios in the post).

“Minor minor on the wall….”

Let’s look at a 5-string A minor arpeggio:

Now there’s nothing wrong with this form.  But I find that a lot of people practice this arpeggio ascending and descending and then when it’s time to play over an A minor chord guess how they play it?

There was a time in the ’80’s where just cycling an A minor arpeggio over an A minor chord would cut it, but now it’s (yawn) boring.  So what can we do to make it more interesting?

Start with the Top Side

In a previous post, I talked about modifying triads to get more complex sounds.  In this lesson I’ll apply that to arpeggios.

The following is a map of alterations to show how chord tones can be modified to create other sounds. 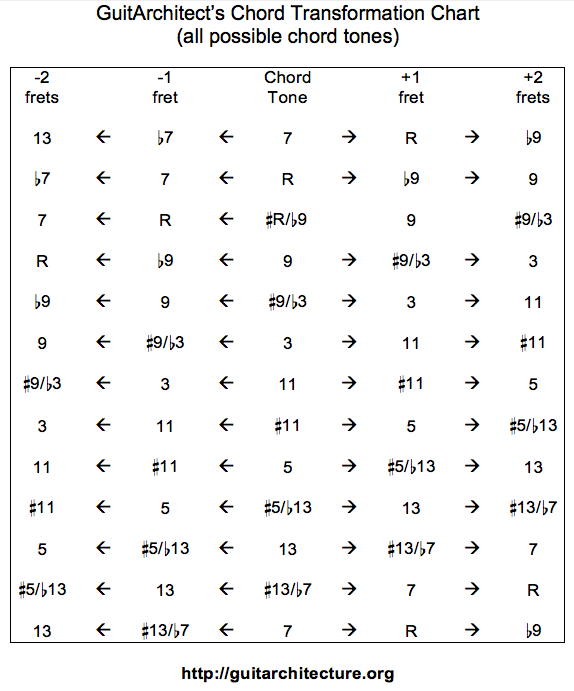 So with any triad:

In this manner, a triad can be altered into almost any other functional chord.

.
Let’s apply this to a minor arpeggio.

In the case of A minor I’m going to change the C on the high E string to B.  This creates an A minor (add 9) sound.

This is already a more interesting sound over an A minor chord to my ears.  But cycling the top notes of the arpeggio creates an interesting arpeggio sequence along the lines of something Tosin Abasi of Animals For Leaders might cycle (Try combining this lick with the one before it to see what I mean).

Going under the Hood

This modification idea can be applied to any of the notes of the arpeggio, but for a moment let’s go in the opposite direction.

In the previous post I talked about superimposing arpeggios.  Here I’ll take the same arpeggio form and drop the low note.

I’m going to go a 3rd below A to F.  In this example I hammer on the 2nd note and then play the rest with sweep picking.

Over F, these notes become:

These notes then become:

The natural 13 with the minor 9 is truly a Dorian modal arpeggio sound.  To play a simplified version –  just play the F major 7 (#11) arpeggio above over a d minor chord.

In the following example, I’ve added an open A string to the F major 7 (add #11) arpeggio.  Try playing this as a repeating figure which changing chords over the top of it.  It might give you a new song idea!

Hopefully this has given you some ideas and some new things to work on.  In the next lesson post, we get back into modes and get deeper into the individual modes.

Thanks for reading and I hope this helps!

The Modal Microscope And A Sequenced Arpeggio Approach

AUGMENT YOUR KNOWLEDGE: SONIC SHAPES AND GETTING MORE FROM AUGMENTED CHORDS

RECYCLING CHORDS PART I OR WHERE’S THE ROOT?

RECYCLING SHAPES OR MODULAR ARPEGGIOS FOR FUN AND PROFIT