I wanted to take a break from the excerpts from the modes book I’ve been posting and post a lesson that’s based on material from my new Harmonic Combinatorics Book.  In that book, I have an entire section about using triads and 7th chords to create more complex sounds.

Seeing (and making sense of ) the bigger picture:

When beginning players see a 3rd position C major chord they see something like this: 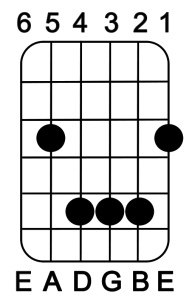 But an experienced player sees something more like this: 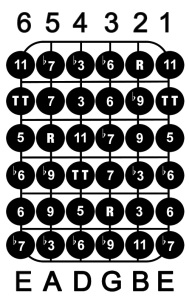 One of the secrets to seeing more of the fretboard is to see chord tones relationally.  I’ll show you how to do that by applying some of the approaches from a previous Triad Transformation lesson:

Lowering the root a 1/2 step gives you a major 7 chord:

Lowering the 3rd a 1/2 step gives you a 9th.  Since there’s no other 3rd in the chord – this becomes a slash chord of G Major over C (written G/C).  It has a lot of the sound of a major 9th chord – but because it’s missing the 3rd it really only implies the tonality.

If you want this to sound like a Major 9th, we’ll need to add a 3rd in as well.

So, as a short cut,  playing a B minor over C we imply the sound of a C major  9 (#11) chord without having to memorize a separate voicing.

This extends into lead playing as well.  Rather than just playing a C major arpeggio over a C chord, here I’ve replaced the bottom note of a B minor arpeggio with a C and resolved it to C:

Here’s another chord voicing of B minor/C:

When I see voicings that use the middle notes of the 7th fret,  I generally try to think of ways to incorporate harmonics into it.  In this example, I’ve added harmonics in to fill out a B minor arpeggio with some encircling to resolve it to C. I forgot the fermata on the first chord – but you’ll figure it out when you hear the mp3.

Now we’ll take this in a different direction:  playing B minor over A minor implies a cool A minor 13 sound.  I’ve added an A to lick #1, and a semi-chromatic run that skips the 3rd and makes it a more open sound.

I’ve resolved the lines to the root notes of the chords I’m playing over – but you may want to stay on a tension depending on the context.

With any approach like this – always use your ears as a guide for what sounds good and what doesn’t.

Did you notice anything about the C major voicings?  Using a B minor triad doesn’t take it to the 13th.

In any chord tone voicing, raising the 5th a step gives you the 6th (if no 7th is in the chord) or  (in this case) the 13th  So using our initial voicings, the easiest way to bring in the 13th is to raise the G on the high E string to A.

Looking at at a little deeper,

if we fully spell out this chord:

the top 3 notes form a D major chord.  As a modified rule for playing over a major chord:

As with any material here, pay attention to the 3 T’s (Timing, (hand) Tension and Tone) and just go through the lesson at your own pace and return to it as you need to.

GETTING THROUGH THE GIG – NEGOTIATING A CHORD CHART PART 3

GETTING THROUGH THE GIG – NEGOTIATING A CHORD CHART PART 2

RECYCLING CHORDS PART I OR WHERE’S THE ROOT?

FAVORED CURRY OR SPICING UP CHORD SCALES AND TRIADS PART 2

FAVORED CURRY OR SPICING UP CHORD SCALES AND TRIADS PART 1