I’d like to start this brief series off with an explanation of how I view the function of theory.

(For those of you who are interested, this is taken from, A brief thought on Music Theory.)

“Theory is secondary to sound.

The history of music originates in organized sound.  Theory and jargon were developed over time as a way to replicate those organized sounds.  When a term like “C major” is used, it tells the informed person what kind of sound is going to be produced. This jargon then, is nothing more than a way for musicians to express ideas to each other without written music in a more efficient manner.

This series of lessons are excerpts from the Guitarchitect’s Guide to Modes: Major Harmony book (due out in 2012).  While that book covers basic intervals and chord theory, this lesson will make the most sense if  you have some knowledge about chords, intervals and chord construction.  Having said that, even if you have a very limited knowledge of these areas you can still get something from this lesson by playing through the examples.

When I was at Berklee, one of the recommendations I got was to learn a minimum of two voicings for every chord type I came across (and more if possible).  While this is certainly a valid point – another way to approach learning new voicings is to reconceptualize what you already know. To see other ways of looking at things in this case, I’ll need to bring in a little music theory/analysis.

When is C, E and G something other than C Major?

In order to identify a chord, we first have to establish the root to determine the functions of the other notes in the chord.

For example, if we look at the notes C, E, and G with C in the bass we get a C Major chord.

However if E is the root of the chord – it’s possible that the chord could be analyzed as an E minor with an added flat 6th and no 5th. 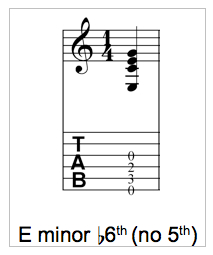 This is sometimes written as C/E.  This chordal notation is commonly called a slash chord and is written in the format of chord/bass note. 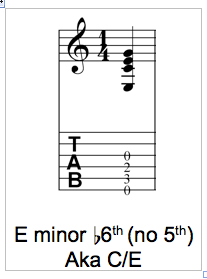 The same is true for the next example.  If G is the root of the chord – the chord could be analyzed as a G sus4 add 6 (no 5).  But more likely you will hear it as C/G. 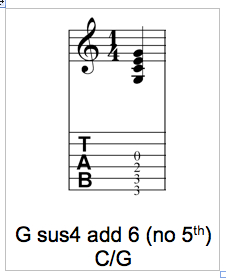 Let’s add a note outside of the triad to the chord.  By putting an A in the bass, the chord spelling is now A-C-E-G (which is an A minor 7th chord).

Just because you have 3 notes doesn’t mean that you’re limited to a specific chord type.  In other words the notes C, E, and G are sometimes more than a C Major chord.

Using the same process as above the collection of notes above could also be analyzed as:

Let’s now look at how a C Major triad can be analyzed over every other root.

A quick theory tip:  Whenever I see chord or a scale that I’m having trouble recognizing, I recommend modulating it to the key of C.  The reason for this is the lack of sharps or flats make any accidentals immediately identifiable. 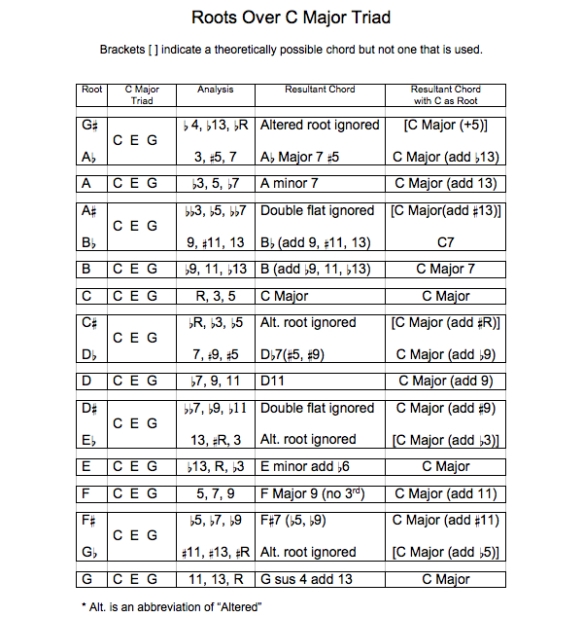 Here are a couple of points regarding this:

Putting the Theory into Practice

Let’s say I’m playing a song that uses a major chord and I want to spice it up.

Here’s a voicing in open position. 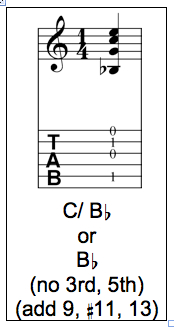 Keeping the root and the 3rd of the C major, we’ll use all the rest of the notes of D major: 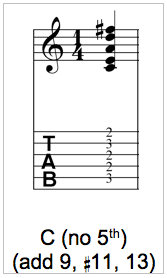 and we get a really rich sounding substitution for a C major chord.

This chord merely scratches the surface of this approach.

In addition to making some new chords from familiar voicings (i.e. Ab maj7#5 = C major /Ab), you also get some improvisational approaches as well (for example – as a starting point for soloing over a Ab maj7#5 you could play a C major arpeggio rather than learning a maj7#5 arpeggio).

For now, I would recommend exploring these sounds both as chords and as an arpeggio approach (i.e playing a C major arpeggio over each root) to see what sounds work for you and then adapt those to other keys.

Additionally, this process can be applied to any chord.  If you feel like exploring this approach – C minor might be a good place to start.

In part II of this series, I’ll discuss a process I call triadic transformation as another way to reconceptualize chords that you already know.

In the meantime, just remember that there isn’t anything here to get too hung up about.  Take the sounds and approaches that work for you and discard the rest.

I hope this helps!  You’re free to download and distribute any of the lessons here but I maintain the copyright on the material. I’m always looking for feedback, so if you have any questions or comments, please feel free to e-mail me at guitar.blueprint@gmail.com.