In part one of this post, I looked at generating different major chord variations based on flatting the root and the 5th.  In part 2, I sharped those pitches and then combined the two approaches to create additional chords and textures.  In this post, I’m going to look at applying these chord tones to  melodic (or lead) ideas.  But first…

The second post of this series ended on a cliffhanger when I said that all of the A major upper extensions would work as substitutions for F# minor chords.   You can read the rest of this Relative Minor explanation if you want to understand why this works – otherwise you can just skip ahead to the next section for some melodic ideas.

Here’s the explanation for this.

In a major chord, the 4th is sometimes known as an avoid note.  In the key of C, this means that the note F is usually viewed as a note to avoid either melodically or harmonically.  If we look at a major scale:

Chromatics are powerful things in music.  They tend to act as tonal anchors to where the tonal center is.  If you play a simple ascending C major scale and stop on the note B, most listeners will want you to resolve to C.   In the major scale the 1/2 step between the 3rd and 4th makes the ear think that F major is the tonal center.

(For those of you familiar with ear training, if you sing a c major scale from C to F – it sounds like you’re singing so la ti Do – instead of Do re me fa.)

One innovation that came about in jazz music was to substitute an #4 for a 4 over chords with a major quality.  This put the 1/2 step motion between the 4th and the 5th.  Since the 5th is a chord tone in a major triad, it has less of an effect of moving outside of the key.

Here’s how this is applied:

Here’s the Major chord shape I’ve been modifying over the first 2 lessons:

Since the b (9th) on the high E string is available, the 9th on the g string is something that can be incorporated as well.

If I’m soloing over A major (or F# Minor)  – all of these notes are fair game.

I try to stay with consistent note-per-string fingerings on strings when playing melodically, so here I’m going to take the same idea and just move the last note to the g string to create a 3 note per string pattern.

Here, I’m taking the same notes and breaking them up intervallically into 4ths (except for the 5th in the last 2 notes which adds some variety in the cycle).  Licks like these are easy to visualize (and therefore easy to manipulate when improvising).

When I improvised this- I played it as transcribed – but when I recorded it – I played the last 2 notes as 1/8th notes instead – please take any of the ideas here and manipulate them as you see fit.

Here’s a similar (but shorter) idea with a scalar pattern at the end.

Here’s how it sounds at 1/2 speed and then at tempo.

A couple of notes:

Now that some initial options have been explored – I’ll take a look at the upper notes of the voicing.  If I take the previous fretboard diagram and extend a note on the g string I’ll have something that looks like the diagram below:

And here’s how it sounds.

When soloing over a major chord – you can play a dominant arpeggio on the second scale degree (i.e. B7 over A major).

In the example below, I’m combining a B9 arpeggio and an A major arpeggio to create a melodic idea.  The A and C# on the D string are the linking material between the 2 arpeggios (they act as the 7 and 9 in the B9 chord, or as the root and 3rd of the A Major).

The important thing with any superimposition like this is to resolve it to a chord tone in the chord you’re soloing over (in this case A). 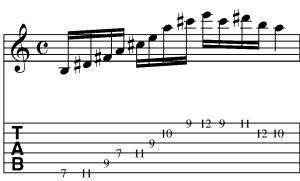 Playing a minor chord on the seventh scale degree of a major chord will get you upper extensions (7, 9, #11 and 13)  of the chord.

When soloing over a major chord – you can play a minor arpeggio on the second scale degree (i.e. G# min7/A).

In the example below, I’m combining a sextuplet idea from the earlier licks and a  G#min arpeggio to create a melodic idea. Again, an important thing with any superimposition like this is to resolve it to a chord tone in the chord you’re soloing over (in this case A).

The “picking” is just a suggestion.  (For example: you could also pull off the D# to the B on the g string and then just continue the sweep picking motion.)

This is really only the beginning of where these approaches can go.  Hopefully this will give you some ideas to explore both in comping and soloing.  If there’s enough interest, I’ll expand this approach to minor and dominant chords in future posts.

For those of you who are interested, these are the approximate settings I’m using in Pod farm for the distorted tone here: