Welcome to the part eight of the GuitArcitecture Mode Visualization lesson series.

If you see anything unfamiliar here, you may want to check out:

In the last lesson, I took a look at adapting minor chords to modes and modal interchange.  In this lesson – I’m going to apply the same process to major chords.

I’ve outlined this process thoroughly in part 7, so if you have questions – just check the instructions there.

Of the parent major scale modes I’ve been covering – there are 3 that can be used over an A major chord: 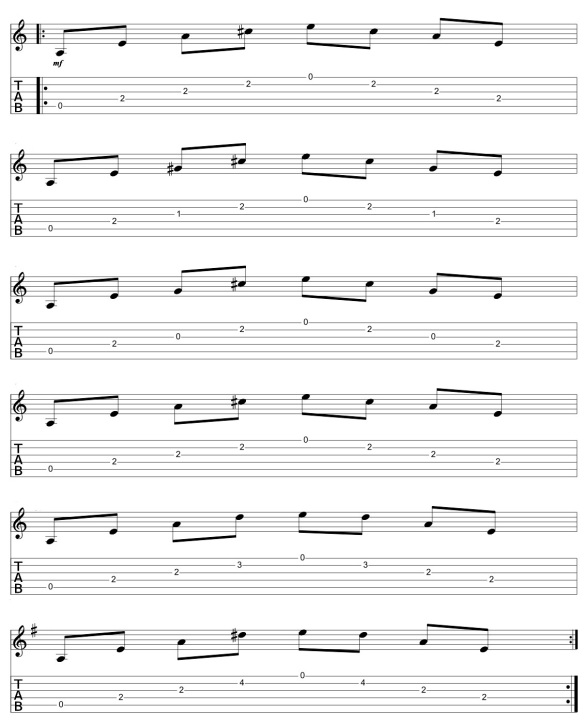 Here are the steps (repeated from Part 7):

Make sure you don’t start every bar with the low A root!

The goal of this is to be able to switch between modes “mid-stream”.   As a first step, when playing these ascending and descending make sure that wherever you are in the pattern ascending or descending that you transition into the next mode smoothly.  The initial goal here isn’t speed – it’s fluidity and being in control of switching between modes.

(See the melodic note below for some other tips once you get comfortable with the transition).

A Major – Play A Lydian, A Ionian or A Mixolydian – Click to enlarge

The modes could be played over this chord are:

A Lydian (recommended), A Ionian (be careful of the 4th) and A Mixolydian

Lowering the root to G# creates an A major 7 chord – which works with either A Lydian or A Ionian.

A sus4 – Play A Ionian or A Mixolydian – Click to enlarge

The chord progression then goes back to A major where any of the 3 modes could be used.

The nice thing about playing with human beings (rather than sequences) is that people can introduce random factors into playing.  A person can make all kinds of melodic or harmonic decisions that require the other person to change and adapt.  It develops a dialog and allows people to become more attune to playing with other people (and ultimately more musical).

The next lesson will cover a go a little deeper into modal chord progressions and offer some new challenges.  As before, just go through the lesson at your own pace and return to it as you need to.  Also please feel free to post any questions you might have (or pm me at guitar.blueprint@gmail.com).

THE GUITARCHITECT’S GUIDE TO MODES PART 4 – MODES AND CHORDS

Making Music Out Of Scales

Getting Through The Gig – Negotiating A Chord Chart Part 3

Getting Through The Gig – Negotiating A Chord Chart Part 2