Welcome to the fourth installment of the GuitArcitecture Mode Visualization lesson series.

If you see anything unfamiliar here, you may want to check out part one, part two, part 3a or part 3b, of the series, but in the meantime, here’s a quick recap:

Any major scale can be broken down into seven 2-string modal shapes that are derived from their scale degree (i.e. position in the scale). These Related Modes are:

The sequential order of the modes is always the same.

Modes do not exist in a vacuum.  They have as much to do with chords as they do with scales and are always associated with either a chord or a chord progression.

Deriving the chords from the scale

Let’s take a look at the initial two-string C Major pattern that we used in the previous lesson.

If we remove every other note of the scale pattern, we can see arpeggiated versions of the triads associated with those modes.

Here are the triads in ascending order with a root on the A String:

(Note: these are only sample voicings – please feel free to use your own)

From this we can develop a generic formula for major scale triads.

So, for example,  the triad built on the first scale degree (i.e. the I chord) of any major scale will always be Major.

If we’re discussing the relative minor key (A minor) – the sequence is the same – it just starts from the vi chord:

If we take a look at the initial 2 string pattern again:

This time I’m going to eliminate the 3rd and 5th note of each pattern.  So in the first pattern:

Here’s the rest of the sequence:

And a generic breakdown in another chart.

Here are the 7th chords in ascending order with a root on the A String:

(Again, these are only sample voicings so please feel free to use your own)

You could extend this idea out beyond 7th chords into harmonizations using the diatonic 9th, 11th or 13ths.  But all of these chords just come from stacking diatonic 3rds on top of each other.    I’ve followed this process through all the diatonic chord tones below with each scale degree of C Major: 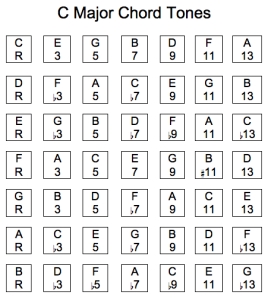 I’ll be explaining a lot more about this in a future post (including multiple approaches for voicing these) but for now here’s a chart that shows the harmonizations in the key of C Major. 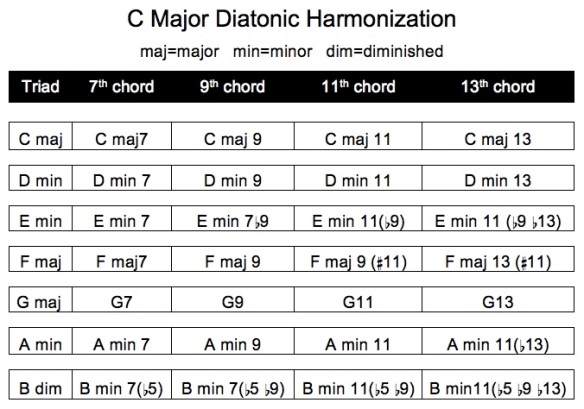 But Here’s The Catch

(and there’s always a catch)

The C Major modes are all just subsets of  the same parent scale.  If you’re playing them over a C major chord (or a chord progression in C Major) scale-wise it really doesn’t make a difference which of the above modes you’re thinking of as it’s all going to sound like C Major.

To get deeper into modes, we need to get into some other tonal centers and talk about Relative Modes versus Parallel Modes and Modal Interchange and that is the topic of the next post in this series.

Here are some important things to focus on for now:

Finally, one other thing I need to mention is that this is just my approach but it certainly isn’t the only one.    You should explore multiple approaches and take things that resonate with you from each of them as each of them will give you more depth of understanding.

As before, just go through the lesson at your own pace and return to it as you need to and please feel free to post any questions you might have (or pm me at guitar.blueprint@gmail.com).

Making Music Out Of Scales

Getting Through The Gig – Negotiating A Chord Chart Part 3

Getting Through The Gig – Negotiating A Chord Chart Part 2