Welcome to part two of modal/parent major scale lesson series that’s been adapted from the forthcoming, GuitArchitect’s Guide To Modes book.  In the last post, I showed how to visualize a major scale on a single string using seven connecting patterns. (Note: you can see that lesson here).  In this lesson, I’m going to expand on those fingerings to include 2-string patterns and start to get into the actual modes themselves.

The power of 2 (strings)

Now it’s time to expand on that visualization process.  Let’s look at the standard guitar tuning.  Here’s a blank fingerboard with the string numbers on the top and the tuning below. 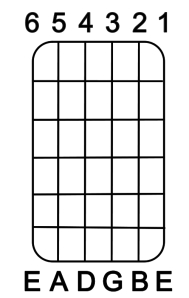 You may have missed an important observation; namely that the open strings are tuned in 4ths except for the second string, B, which is tuned a 3rd above the G string.

In a future lesson post, I’m going to show how these modular patterns connect, but the first step is visualizing the initial 2 string patterns and then associating them with a related mode.

So if, for example, we combine the C major scale on the B string:

with the C major scale on the E string:

We get a series of interconnecting patterns that can played as a melodic sequence like this:

Don’t worry about the odd time signature.  It’s included here to show all seven 2-string patterns, but this can easily be adapted to any time signature.

A mode is a type a scale that starts from a note in a parent scale and is tied to a specific chord type.

For example:  C major has seven unique notes.  The scale degree of each note in the parent scale determines the name of the associated mode.  Here are the modes in sequential order.

While this has been applied to the key of C major, the modal order is the same for any parent major scale.

Each mode then, can be viewed as just playing the parent major scale starting from a different note and played over a related chord.

For example:  if I play any of the modes above over a C major or a C major 7 chord, it’s all going to sound like C major.  I’ll get into the associated chords for each mode in next week’s lesson, for now understand that a mode is:

As a first step, let’s go back and visit that initial 2-string pattern:

Here the same pattern broken down into seven individual shapes. 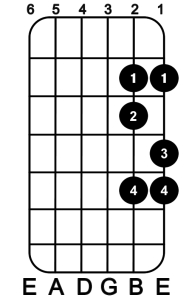 Don’t worry about how these fingerings relate yet or how to use them outside the initial 2 string patterns – that will all be covered in the next lessons.

Here are the important things to focus on for now:

(C Ionian, D Dorian, E Phrygian, F Lydian, G Mixolydian, A Aeolian, B Locrian then back to the C Ionian and D Dorian).

.
A technical note and a tech note:

I played the examples as 16ths then sextuplets.  I changed the ending a bit for the sextuplets on this example to fit the 4/4 phrase better (it’s just the last sextuplet descending and ascending on the B and high E strings).

The drums are the same raga drum file I’ve used before – but I sped the drums up with an AU plug in – AU Varispeed:

It’s a cool plug in to use for sonic mangling – or in this case when I needed to track something quickly.

and the Low E and A strings:

I thought I recorded at least versions of this but the one I tracked was recorded too hot and in distorted (in a very unpleasant way).

The GuitArchitect’s Guide to Modes: Melodic Patterns takes all possible permutations and variations of 1, 2, 3, 4, 5 and 6 note groups of these 2 string shapes and then shows how to build them up into extended melodic sequences.   As a 300+ page book, it is a substantial reference/informational text, and goes into further depth than any other known book on the subject.  You can find out more about it here.

In the next lesson, I’m going to cover how to make positional sense of these forms and start to move towards making modes (and music) out of them.

The next posts in the series will be substantially shorter (and have more examples) but in the meantime, I recommend that you just go through the lesson at your own pace and return as you need to.  Please feel free to post any questions you might have (or pm me at guitar.blueprint@gmail.com).

MAKING SENSE OF THE PENTATONIC SCALE – DIAGONAL FORMS – PART ONE