This is going to be a short lesson as the concept is really simple but making it work requires a lot of shedding.

For those of you who have been following the guide to Modes might remember that back in part 3a/3b, I outlined a method for connecting 2-string modal patterns positionally using a simple rule where:

(As the scale ascends the patterns descend and vice-versa) 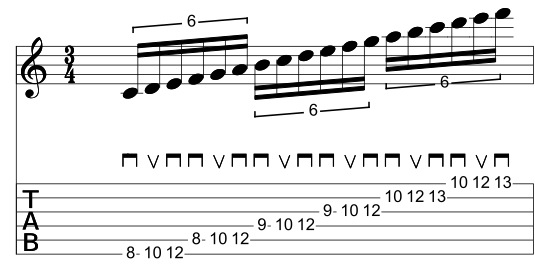 Can be broken down into three distinct two-string patterns:

Previously, I took the two-string shapes and moved them in octaves – but looked at positionally…

Note that the first note of each 4-note goes from C to B to A.  (Or uses the C Ionian – B Locrian – A Aeolian shapes).

Since the pattern contains a c and a f (and avoid note over C Major) I decided to use this form over the relative minor (a minor) In this audio example below, I’ve played an A minor (add9) chord and then played the notes as a sextuplet (then as 1/16th notes).

The workaround is very simple, I just change up the pattern order on the b and e strings.

It does make the overall pattern a little more scalar, but the only main difference is that this pattern lacks the A note.

In the audio below, I just played a sextuplet pattern and ended on the B (the 9 over A minor) the first time.

Okay!  If you like this sound – here’s what I think you should do:

This might sound like a lot of work, but the reality is that pretty quickly you’re going to find one or two of these that you really like and the idea is to tae those and try to incorporate them into your playing as thoroughly as you can!

I hope this helps!