I haven’t posted a lesson in a while here – so I though I’d post a really quick one for getting some mileage out of a single chord vamp.  This is a little something I improvised on a tune for a live performance that’s now a loop based riff I build on live with a tentative title of, “remedial looping”.

First, let me take a BIG cue from my harmonic combinatorics book.  When I look at an E minor chord – harmonically I see something like this:

So whether it’s an E minor/ Em7 / Em9 / Emin 11 (b13) – I know that playing any notes from the E natural minor/G major scale will get be SOME variation of the above chords.

As a start let’s look at an E minor 7 chord: 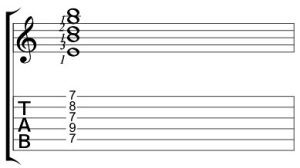 Interesting observation – if I look at the barred notes on the 5th fret: 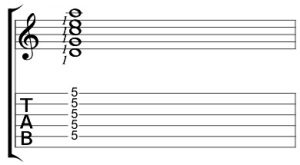 The notes are all found in the parent scale.  If I think of this voicing as a virtual capo and drop some of the notes on the 7th fret of the E minor chord to the 5th fret I get this really cool chordal cluster: 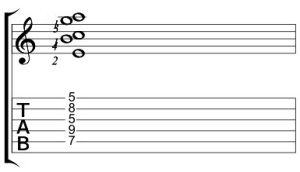 Going further – I could use open strings instead of the 5th fret and get a less clustered sound.  Instead, I decided to flip my capo around and use it as a partial capo on the second fret so that the low E string would ring out unobstructed but the rest of the notes on the second string would be fretted by the capo. 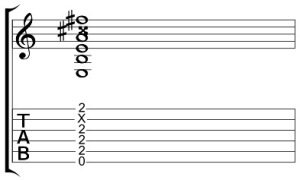 Using the same idea as the previous example here’s the same modified Emin7 shape using notes on the 2nd fret instead of the 7th fret. 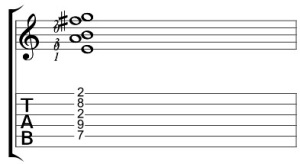 Make sure to play through those clusters individually as there are some good sounds there!

Put it together in a little string slaps for percussive effect and you have a little groove like this:

This is a pretty simple idea, but there are a few challenges with executing it cleanly.  Just remember to pay attention to the 3 T’s (Timing, Tone and (hand) Tension) and be aware of your finger position to make sure that the strings all ring out.

File under – a little theory can go a long ways!  I’ve left a number of variations out of the lesson to have one simple thing for you to develop on your own.

PS for those of you who are interested – this was tracked on my iPhone with the JamUp Pro app and a Line 6 Sonic Port interface.  A review of the Jam Up app will be up in the weeks ahead on Guitar-Muse.