A dilemma of growing up in a small town is that you don’t always have access to information that would be helpful to you.

In my senior year of high school, I had a problem as my beloved Aria Pro II Knight Warrior (Yes – with the Kahler.  No – not with the studded leather belt and the buxom model in my arms) had an ever-widening hole where the lower strap button was screwed into and would fall out occasionally.

I asked what I should do about this and was told that you could always stick a toothpick in the hole and that would fill in the gap.  And that worked pretty well. For a while.  Then I would go to 2 toothpicks, then 3…

That year, I entered the annual talent show with some people who I was playing with and we had I think a 2 song set.  One tune we were playing was Ace Frehley’s  Rock Soldiers.  I have no idea why,  but at the time I was really into the song.  Maybe because it was the rock version of The Devil Went down to Georgia.

At the point of the solo – I was ready to fully fly into it and really show off (or so I thought at the time) – when – you guessed it –the strap button fell out and some 20-30 tooth picks came gushing out of my guitar.

I dropped to the floor to prevent the guitar from falling, but what I hoped would be a moment of triumph turned into a very limp guitar solo and much embarrassment.

At that moment I realized that I should learn something about guitar set up.  I studied it a bit, did a lot of guitar set ups (and some repairs) when I was at Sandy’s Music  and got to the point where I could do basic maintenance and minor repairs on my guitars.

Recently I noticed that with the  tremolo  installation on my guitar that the high E string in particular binds up a bit and so as a first step, I decided to lubricate the nut slots to see if that helps with binding.

In this case I’m using Guitar Grease, a graphite paste which I got from Stu-Mac 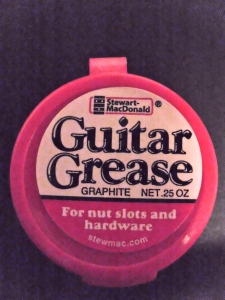 and one of those dreaded tooth picks mentioned earlier (which I probably got with a lunch somewhere along the way).

You don’t need to buy a special paste to do this – you could just as easily use a pencil – but I have a difficult time getting the groove evenly lubricated with a pencil and this seems to work better for me.  Additionally as you don’t want to use more than necessary –   I find the tooth pick helps with controlling the portion of graphite I’m applying. 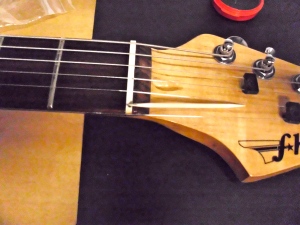 Removing the string from the nut slot – I just scoop a little graphite paste onto the tip of the toothpick and lubricate the nut slot particularly focusing on the entering point and exiting point of the string – as that’s where it typically binds.

If you’re a beginning guitarist you should gain some familiarity with basic repair and maintenance.  In addition to saving yourself some cash – if you ever have to take it to someone for repair – you’ll be able to speak about the problem intelligently and save some bench time (and money).

To use a non-guitar example  see the difference in price next time in going to an auto mechanic with a specific problem (“there’s something wrong with the ignition – the battery is fully charged – I get power to the radio, lights, etc – but the car won’t start”) versus “I hear a knocking sound”…

And by the way, listening to Rock Soldiers for the first time since high school I don’t get it now either.  But  I did just listen to Loudness’ Let it Go looking for this clip and that brought a smile.