In the previous recycling chords lesson, I looked at ways to reinterpret chords. Another way to create different sounds is to take something as basic (and familiar) as a triad and alter tones to create more complex chords.

Note: this process isn’t designed to replace the need to learn multiple chord voicings but instead to supplement it.

Starting with the Flats

This idea also can be applied to the root of the chord.

Likewise, if the note C is flatted a 1 step (2 frets), the new note is Bb. This creates a C7 chord with no root. 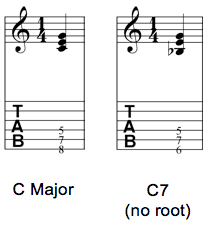 This is a good place to make a couple of notes:

First: the voicings presented here are used to demonstrate the process, but I like some of them better in other registers.  For example, here is the C add 9 voicing on the top 3 strings.

Second:  one reason to explore voicings without roots is that, in an ensemble setting, the bassist often holds down the root of the chord.  If you need the root –  it’s easy enough to just add it in.  Here is the same chord with a root:

The following is a map of alterations to show how chord tones can be modified to create other sounds.

Taking the approach above, some general rules can be applied to a major triad.

The root of the chord can be lowered to the 7 or raised to the 9.

The third of the chord can be lowered to the 9 or raised to the 11.

The fifth of the chord can be lowered to the 11 or raised to the 13.

In this manner, a triad can be altered into almost any other functional chord.

Here’s an exercise that utilizes a D major triad to illustrate this idea:

The first step of this exercise is to make sure you can visualize triads both horizontally and vertically across the fingerboard.

Here’s a series of  D major chord inversions in the 2nd position. 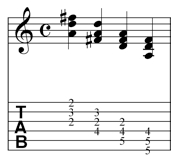 Here are the D major inversions in the 5th position 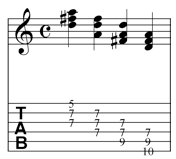 and in the 10th position. 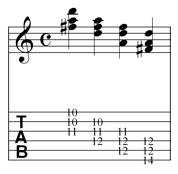 If these voicings are unknown to you, start by familiarizing yourself with them before continuing to the rest of the lesson.

Note: the important thing with both the horizontal and vertical voicings is knowing where each chord tone is located in the voicing.

One way to practice this is to play through the chords and stop at random points and ask, “where is the root?” “where is the 3rd?”  “where is the 5th ?”  This has to be full internalized to be able to intelligently transform the chords, with the goal being instant chord tone identification.

As with the horizontal voicings, if these voicings are unknown to you, start by familiarizing yourself with them before continuing to the rest of the lesson.

Now that the preliminary steps have been taken, let’s begin the process.

Now, let’s go through the exercise as individual steps to explain the process.

You get the idea.  Transform the chord into every possible voicing and repeat with every other inversion.

When less is more – A case for smaller voicings

When I started out playing, if a song called for a C major chord, I’d play something like this:

While there’s nothing wrong with six note voicings, context is everything.  It took a while to realize that when playing in larger groups, smaller voicings sometimes helped propel the song and allowed for better voice leading.

For example: here’s the same C Major chord but with just 3 notes.

And here is the voicing in a I-iv-V7 (C-F-G7) progression with smooth voice leading.

If you’re playing solo guitar – this isn’t going to fill a lot of space sonically but it works well in an ensemble, and it’s easy to play.  A win-win.

I hope this helps!  In a future lesson I’ll go further into this concept and use it to create 9th, 11th and 13th chords.  In the meantime, you’re free to download and distribute any of the lessons here but I maintain the copyright on the material.

I’m always looking for feedback on what people find useful and what they don’t, so if you have any questions or comments, feel free to e-mail me at guitar.blueprint@gmail.com .